On-going health crisis around COVID-19 has affected all walks of life. Major countries economy in the world is undergoing to the recession, where India also not exempted on it. As food and health are basic amenities for the livelihood both have worse impacted. Most countries used lockdown as the primary tool to control the spread of the virus; same India had opted to it. Due to this sudden lockdown agriculture sector is highly impacted. Right from production to consumption stage pandemic is hit badly.

As India is agrarian economy, contributes 18% to GDP and employee’s 58% workforce, feeds 1.3 billion people, and where 94% farmers are smallholders.  Majority of farmers rely on daily wages to supplement farm incomes. Total value of India Agriculture as on 2017 is 2,670,146 INR, crores.

We can see how the COVID-19 impacted in different level in the agriculture sector.

Form the end of March to May is the peak period harvesting Rabi crops like wheat, gram, lentil, mustard, etc. (including paddy in irrigated tracts) are at the harvestable stage or almost reaching maturity.  Wheat is the second most important crop (after rice) in the country with about 30 million hectares of land sown with it in the Rabi season. Gram (chickpea), sown on about 9 million hectares of land in the Rabi season, is the most important pulse crop of the country. Mustard, sown in the Rabi season on over 6 million hectares, is the second most important oilseed crop (after Soybean). Most laborers have a hand full of work during these 2 months. During this peak period, the only pandemic has hit badly both for the laborers and farmers. Due to restrictions of lockdown whole harvesting operations has been halted.  Major crops like Rice in south and Wheat in the northern part of the country are highly cultivated in Rabi season and where they are ready to harvest.  Both are labour intensive crops. Due to reverse migration and restriction in traveling between villages caused a shortage of labor. Most of the migrant laborers are involved in harvesting operations for example southern states of Telangana and Andhra Pradesh harvesting operations were done by migrant labor where people come from Bihar. Compare to grains, perishables has affected, because skilled labour is required for harvesting the perishables. Most of the perishables get ripened without harvesting them, resulting in quality deterioration.

India is lack farm mechanization and about 60% of farm activities are still manually executed. As per the International Labour Organisation statistics, the share of agriculture in India's total workforce was 43.9% in 2018, and based on the census 2011 figures, around 24 lakh migrants work in fields across India. As per the census of 2011, 263 million people are engaged in the agriculture sector and over half of them are now agricultural labourers, a trend observed for the first time in the past 40 years.

For the next agricultural season, the Ministry of Agriculture is emphasizing on mechanized farm operations, to keep the norms of physical distancing in place. There are reports to suggest that states like Punjab are already making efforts to bring a shift in the cropping pattern from the usual rice cultivation to maize for its greater mechanized operations. At a time when rural farmworkers are grappling with the loss of livelihoods, a greater shift towards mechanized operations can act as a further deterrent to the possibilities of finding work shortly.

This is the major visible impact in rural India. At the beginning there are lot restrictions though F&V is exempted, the ground reality is different. Even if the produce is harvested and shipped there is uncertainty over the consignment reaching the intended destination. Due to these bottlenecks, perishable produce gets rotten and strewn within the consignments before reaching markets. 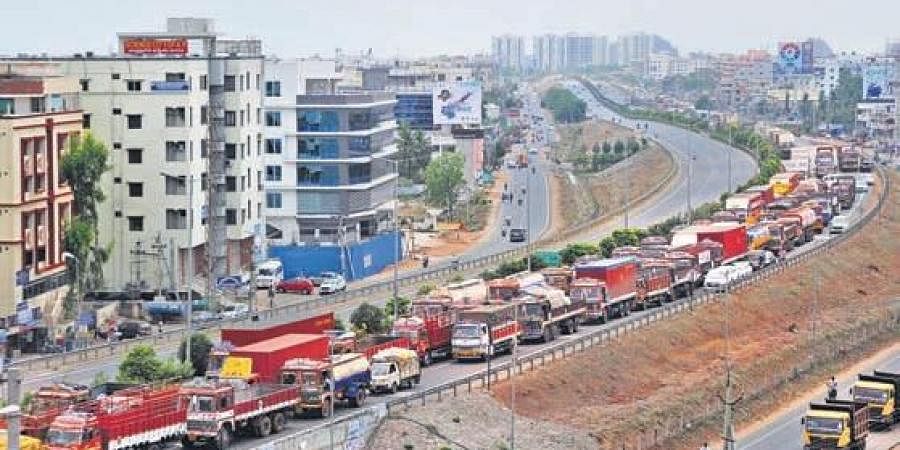 Agri supply chain in India is highly scattered. Fruit and vegetable market has an 85% share in markets comprising by roadside vendors, pushcarts, and small shops which takes huge time to reach and sell for customers.

But to tackle the supply chain shortages lot of startups came forward to serve. For example, Ninjacart B2B fresh produce start-up has procured the product from all farmers who are not engaged before. Because of their established network, the started delivering perishables to residential communities and apartments in 7 cities. And mostly of Agri supply chain providers are tied up with e-commerce platforms like swiggy , zomato, etc., to deliver the produce directly to consumers from their aggregation centers which are a positive thing.

The functioning of mandis has been marred by complicated procedures imposed in the name of enforcing social distances. In most states, no more than 30-50 farmers are being allowed to sell their crops in a day. As a result of restrictions on the number of farmers who were allowed into the mandis on any day, there were often long queues of farmers, with tractor-loads of grain, waiting outside the mandi gates for hours and days. In many states, farmers are required to do online registration and are given a particular date for taking their produce to the mandis.

Lack of proper infrastructure and facilities in the mandis has also created the problem that Coronavirus infections have been spreading among traders, workers and retailers who work in the mandis. Several mandis have been identified as super-spreaders of Coronavirus. For example, the Koembedu market which is one biggest market in India now becomes a super spreader of the state. There are many reports of closing down of mandis because of Coronavirus infections. This has become a major cause of disruptions in the sale of produce in the mandis in recent weeks.

Different states have followed their procedure to overcome these situations. For example, Telangana has opened village level procurement centers in panchayat and Mandal levels and given an option for the private traders and retailers to purchase the product there itself. To follow social distancing norms, they have distributed tokens to the farmers to avoid the rush.

The decrease in demand and Price fluctuations:

Here the horticulture and floriculture sector is badly affected. Non-functioning of HORECA-Hotels, Restaurants, and Caterings, has flattened the demand curve. Initially, there is panic buying where supply is less and demand is high but soon the scenario has changed. Due to a lack of demand, the prices have come down. Because of no work and low income, the consumption trend and purchasing power have decreased simultaneously the demand decreased.

Retail prices of perishable vegetables have gone up, the wholesale prices have fallen by 15-20% because of the reduction in demand. Demand has destructed instead of B2B, the demand for B2C is increased so the prices have fallen because of less engagement of middlemen's. In the overall picture if you see the price curve seems like a 'U' shaped curve.

The months of March to June are the season of marriages and ceremonies in India, where there is a huge demand for flowers, adding to that closure of pilgrims and restricted religious gatherings impacted floriculture as well. Famous flower crops like jasmine and marigold get blooms in summer.

The agriculture sector is less affected compare to other sectors in India. Proactive measures were taken by both central and state governments for the smooth moving of supply and harvesting operations. Initially, there are disruptions which were impacted the sector for short period but soon through relaxation measures, activates get ramped.

Chand, a farm economist, said indicators show that "the farm sector will grow at least 3%". This farm growth will contribute at least "0.5% or a little more" to India's overall gross domestic product (GDP) growth, he said, helping to stave off a recession. In 2019-20, the farm sector grew 3.7%, according to the Central Statistical Office.

According to Technoserve, agriculture value is projected to decline by approximately 4.4trillion INR. And also there is a decrease in supply by ~470 million MT from 2020-2022.

By taking the crisis into opportunities reforms should be taken by governments. Challenging factors like supply chain, low market infrastructure, uncertainty in climate, price fluctuations, lack of market intelligence, low-value addition, and lack of export and trading facilities, all these should be improved step by step. If we overcome these factors India will become a superpower globally. Indian is an agrarian economy even now the agriculture sector is the only growth driver for the Indian Economy to overcome from recession.

ISBN: 978-81-937148-5-0 A Study of Market Arrivals of Seven Key Food Commodities in India – By Vikas Rawal Ankur Verma Published by Society for Social and Economic Research

9)      Contribution of agriculture to Indian economy

Assessing the degree of COVID-19 impact on farming clusters in India, and suggested response May 2020- Report by technoserve.